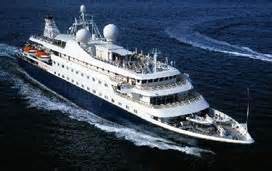 SEADREAM
SeaDream Yacht Club offers a luxury cruising experience on two ships; SeaDream I and SeaDream 2.  SeaDream began in 2002 and uses the former Sea Goddess Cruise ships.  The ships are considered boutique as their size is very small at just a little over 4,000 tons and carrying a maxim of 112 guests.  Their advantage when it comes to their relatively small size is the ability to visit some very small ports of call that many traditional ships do not get to and to offer very luxurious dining.  Whereas on many cruise ships in the evening the focus is entertainment following dining, the focus on these ships in the evening is a very leisurely and luxurious dining experience.

SeaDream sails the Caribbean and the Mediterranean and from time to time is charted.
​
SeaDream I and  SeaDream II
Built 1984 & 1985 Respectively
Entered Service: May 2002 and January 2002 respectively
Gross Tonnage: 4,253 and 4,233 tons
Type Of Cruise Ship: Boutique Ship
Passengers: 112
Crew: 95
Passenger Decks: 12