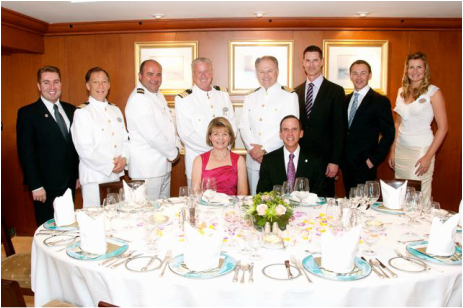 For those yearning for a luxury experience, this can be found on several cruise lines.

Luxury cruises are a cut above mainstream and premium cruises as they strive to offer a high-quality product featuring emphasis on service, cuisine, enrichment, entertainment on ships that are far smaller than some of the very large ships that sail the high seas.

Guests do not find the ships to be very crowded, and the ships are well appointed with cozy spots for the guests to enjoy.  There is a lot less of the nickel and diming that has become more of the norm on mainstreams ships.  They do not have the constant announcements about shopping and drinking, and many of the items available to guests are already included in the cruise fare.  If one factors in the cost of the cruise fare on the other two categories of cruise lines with what is included in the fare of luxury lines, the cost is not that much more for a luxury cruise.

​When people ask us to compare luxury cruising to the other two cruising categories we try to use analogies of other products which those who have not yet cruised or have not cruise luxury lines might be more familiar with.

For example, if cruise lines were hotels we would describe luxury cruise lines as five start hotels that are either boutique like hotels or are similar to Ritz Carlton and the Four Seasons hotel properties.  We think of premium as Hyatt and Conrad Hilton/Hilton Marriott Marquis/Marriott  Properties and we think of mainstream cruise lines similar to Hilton Garden Inn, Hampton Inn, Residence Inn, Marriott Courtyard and other similar hotel chains.

The luxury cruise lines include:

​We will be expanding the luxury category over the coming months to include information on the Luxury Cruise Lines but also on luxury experiences that one can realize on other cruise lines with emphasis on luxurious suites and other venues such as specialty restaurants.