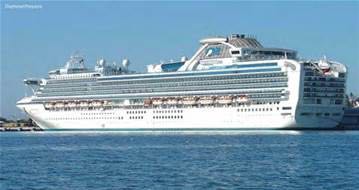 Princess Cruises began in 1965 and in 2003 was acquired by Carnival Corporation.  Princess became well-known to many in the United States with the long running television series The Love Boat.  In fact, The Love Boat helped to make cruising very popular to many Americans and others around the world.

Princess is a mainstream cruise line that appeals to a range of people including those with and without children.  It sails a diverse set of itineraries.  Princess is often the next level up from the introductory cruise lines such as Carnival Cruises and Norwegian Cruise Lines.

It sails different size ships from medium, large to very large cruise ships, and offers a wide ranges of activities and venues depending on the specific ship sailed.

Their itineraries are extensive and include: Alaska where they also have their own lodges for those wishing to book a land program before or after an Alaskan Cruise, Australia & New Zealand, Canada & New England, Hawaii, Pacific Ocean Islands, Asia, California Coastal, Caribbean, Europe, Mexico, South America, along with even a World Cruise.