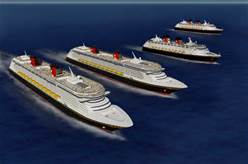 Disney Cruise Lines began operation in 1996.  Prior to offering cruises, although they had no ownership in the company, they leant their brand name to a cruise line called The Big Red Boat.  With the introduction of Disney Cruises that partnership ceased and eventually The Big Red Boat ceased operation.

​When you think of Disney Cruise Lines, they are Disney but at sea rather than on land.  They offer a very unique experience for families but also for those without children.  You will see multi family generations sailing them as well and children of all ages.

They are the premium cruise line for families.  You will find many of the Disney characters on board. Something unique about them is that you will stay with your waiter the entire time but will rotate with them to a different dining venue each evening.  Three are lots of activities for the children but also activities for the adults.  Disney is one of the few cruise lines that does not operate a casino.

Similar to their hotel properties, their rooms are planned with families in mind so that the children can stay with their parents and they do have some very special suites.

​Disney sails several itineraries including: Bahamas, Caribbean, Northern Europe, Mediterranean, Alaska, and Canada.  Some of their cruises can be combined with hotel stays at Disney World.