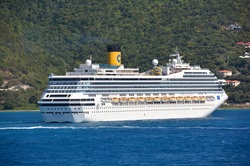 Costa Cruises has a very long history.  Costa was first formed in 1854 and originally operated cargo ships.  In 1947, it branched out to passenger ships.  Overtime, it converted its entire fleet to passenger cruising.  Costa is part of the Carnival Corp since 2002 when it came over to Carnival as part of the acquisition of P&O Cruising.

Costa is a mainstream cruise line and another one of the entry cruise lines.  It serves several different markets including North America, Italy, Australia/New Zealand.

A black market against Costa occurred in January of 2012 when Costa Concordia ran aground.   This catastrophic event reenforced the importance of safety including lifeboat drills and the adherence to not diverting from planned routes.

Costa is known for the Toga Party where guests put a sheet over their clothing for a toga party.  Its cuisine includes a good deal of Italian foods in keeping with the heritage of the cruise line.

Costa has several classes of ships.  Their ships are very recognizable at sea and in port with their yellow smoke-stacks.