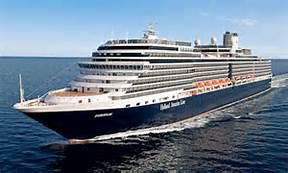 Entered Service: 2016
Gross Tonnage: 135,000
Type Of Cruise Ship: Large Mainstream Ship
Passengers: 4,000
Crew:  1,450
Passenger Decks:  15Holland America Lines has a very storied history.  Between 1873 and 1989 it operated as not only a cruise line but as a Dutch shipping and cargo line.  In 1989, it became a subsidiary of Carnival Corporation.

Holland Americal Lines is considered a premium cruise line.  It appeals to many adults and also families will sail the line as well.  It is known for the size of their ships which today are mainly considered medium in size compared to some of the resort styles of ships and it sails a wide range of itineraries around the world.  It has several different classes of ships.  We do want to note that they have one relatively small size ship which is the Prinsendam which sailed with other cruise lines including Seabourn and Royal Viking and they do have a couple of larger size ships.